This interactive map is designed to give you some visual representations of what slavery was like in Missouri around the 1840-1850’s time frame. There are points of interest relative to Celia’s trial and the Pro-Slavery debate in Missouri. Additionally, there are layers that give a visual representation of the Missouri Compromise and then the Kansas-Nebraska act.
The final two layers are a portion of the counties in Missouri and their slave density per county. This very basic representation of the counties along the Missouri River gives one a look at what slavery might mean to these counties in regards to the larger Abolitionist debate at the time. There is a large number of slaves in the counties along the river, and rivers make for good farmland/farming, which might explain the high slave numbers.

It is important to note that Celia’s trial county of Callaway has one of the highest numbers of slaves in the state. You can find more information here. 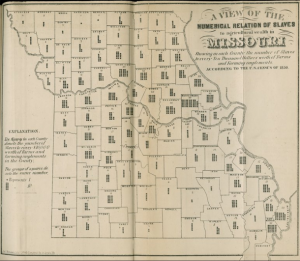 This map is an 1850’s slave density map for Missouri. This map is a follow on to the previous interactive map of slave density. This map gives a state wide representation of the slave population. The Key says: number of slaves to every 10,000$ worth of farmland and farming implements in the County. Once again, Callaway county and many of the counties along the river have a high population of slaves in relation to farmland.

Courtesy of the University of Denver and Edwin Leigh 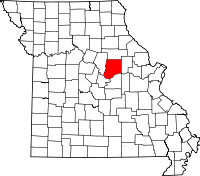 This is a helpful visual aid for Callaway county, Missouri.
Courtesy of Wikipedia