Lizzie Borden was an average 32 year old woman with a family who was pretty well-off with their finances. 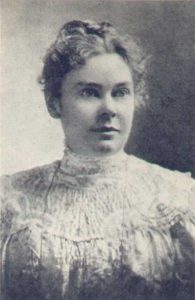 She  was the average white woman in the 1890s in Fall River, Massachusetts; high class and beautiful. Women like Lizzie Borden did not commit crimes, let alone crimes of such violent nature. Every aspect of Lizzie’s life had been solely based off of her race, sex, and socioeconomic status. Let’s dig deeper into how these characteristics, in addition to the type of crime she committed, influenced how Lizzie was tried and acquitted.

We would like to believe that the justice system disregards all individual bias during trials but the Lizzie Borden trial has proved that our system has not always been this way. Many factors including sex, race, and socioeconomic status had a huge impact on not only who was arrested for crimes, but extends further into how and why they were tried the way they were. According to the Crime and Justice Journal during the time of 1890-1899, mainly sex and race influenced judges and juries.

Beginning with purely arrests for violent crime, such as murder, nonwhite citizens had an arrest rate of 9.1 per 100,000 people and white citizens only a 2.9 per 100,000 1Gurr, Ted Robert. “Historical Trends in Violent Crime: A Critical Review of the Evidence.” Crime and Justice 3 (1981): 295-353. http://www.jstor.org/stable/1147382.  From this information we can conclude that whites had a lesser chance of getting arrested, therefore, a lesser chance of appearing in court in front of a jury.

Based off of the types of offenses in Massachusetts; only 3.0 per 100,000 people committed murders in 1875-1894. Murder offenses began to decrease in 1895 and went down to 2.5 per 100,000 people 2Gurr, Ted Robert. “Historical Trends in Violent Crime: A Critical Review of the Evidence.” Crime and Justice 3 (1981): 295-353. http://www.jstor.org/stable/1147382. In comparison to other crimes such as assault, forcible rape, and robbery, the murder rate is seemingly low. From this information we can infer that such violent crimes during the time was uncommon and from understanding this concept it allows us to better understand how the judge and jury in the Lizzie Borden trial viewed her crime itself. Murder itself was uncommon, then throwing in the fact that she was white led to a trial that the judge had probably never been exposed to. Still to this day many people find it hard to believe people have the audacity to take someone’s life, let alone a woman take two people’s life is something that is hard to grasp. 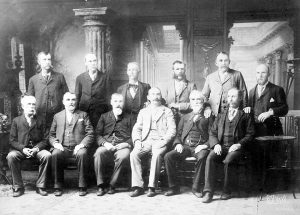 The Jury of men for Lizzie’s trial. Courtesy of Wikimedia Commons.

The Lizzie Borden trial occurred in June of 1893. The prosecutor, jury, and all others involved in the deciding factor on Lizzie’s indictment were men 3“The Lizzie Borden Case.” Ameri
can Eras. . Encyclopedia.com. (December 13, 2016). http://www.encyclopedia.com/history/news-wires-white-papers-and-books/lizz
ie-borden-case .
The jury was composed of men who were all friends with her father. The statement that was the deciding factor for Lizzie was when her attorney asked the gentlemen of the jury “To find her guilty, you must believe she is a fiend. Gentlemen, does she look it?” 4“The Lizzie Borden Case.” American Eras. . Encyclopedia.com. (December 13, 2016). http://www.encyclopedia.com/history/news-wires-white-papers-and-books/lizzie-borden-case. Lizzie Borden was tried not guilty based off of how she looked. Because she was a high class white woman she could not possibly commit such a brutal murder with an axe.