This map introduces the proximity of Lizzie Borden to an area of high violent crime; this includes crimes such as murder. Based off of this map we learn that there is a correlation to Lizzie Borden’s location to crime and her actions leading up to the murder. Lizzie had tried to buy poison prior to the axe murder. This shows premeditation and how her distance to areas of crime could have influenced her intent to murder her parents.

Socioeconomics plays into the murders as well. It has come to the surface that Lizzie Borden’s main motive for killing her parents is money. Her father was worth a large amount of money on top of the over $300,000 for the house alone1Duniho, Terence, and Stefani Koorey. “Http://lizzieandrewborden.com/wp-content/uploads/2011/12/FallRiverTrag.pdf.” Lizzieandreworden.com. http://lizzieandrewborden.com/wp-content/uploads/2011/12/FallRiverTrag.pdf.. As for killing Mrs. Abby Borden, she knew if her father was gone the money would go to his wife. The only way to ensure Lizzie would get the $300,000 was 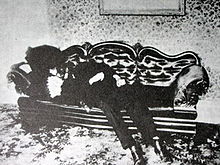 Shortly following the crime, the Massachusetts court created a doctrine that “high social positions and its advantages aggravate rather than palliate a crime” 3“High Social Position and Crime.” 1897.The Washington Post (1877-1922), Nov 20, 6. http://search.proquest.com.mutex.gmu.edu/docview/143812557?accountid=14541.. This doctrine in relation to the Lizzie Borden trial is conflicting. One of the reasons Mrs. Borden was found not guilty was simply because she didn’t look like a “fiend”4“The Lizzie Borden Case.” American Eras. . Encyclopedia.com. (December 13, 2016). http://www.encyclopedia.com/history/news-wires-white-papers-and-books/lizzie-borden-case. who could have killed her parents solely based off of her looks and therefore, her status of wealth.